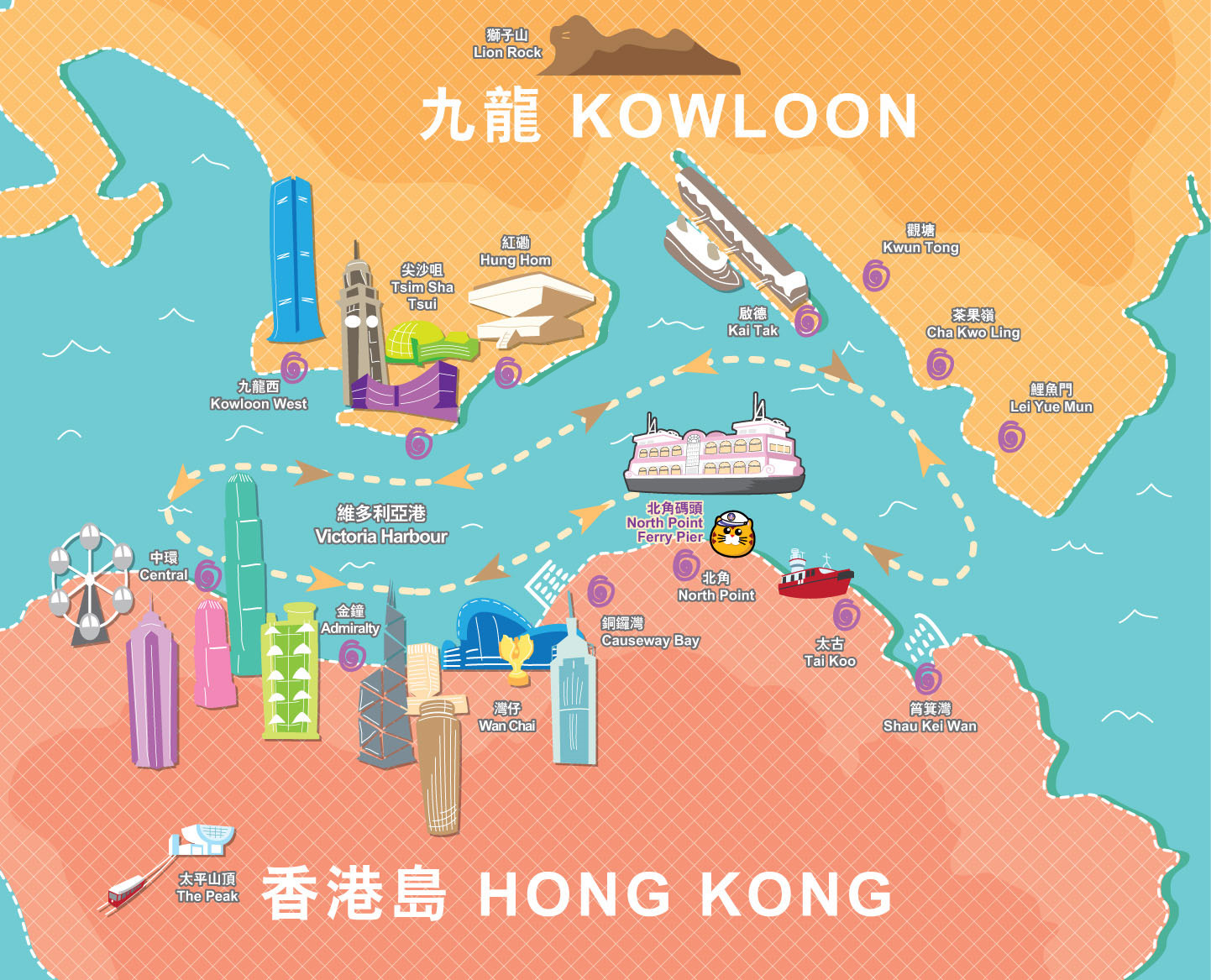 Harbour Cruise - Bauhinia leads you to all the famous architectures in Hong Kong. You may interact with the inspiring and energetic city of Hong Kong in 360 degrees to light up your day. The whole journey takes approximately two hours to complete.

Hong Kong Bank Headquarters: designed and built by a British architect, Sir Norman Foster, using bridge-building technology to form the supporting structures, is one of the most expensive building and construction in Hong Kong.

Bank of China Tower: 315 meters in height, designed by the American-Chinese architect Mr. I.M. Pei, who intended to represent a bamboo shoot pushing upwards and thus the strength of the Bank of China.

Tamar Site and Prince of Wales Buildings: the former joint headquarters of the British Forces in Hong Kong, and they are now a military base of the People's Liberation Army.

Golden Bauhinia Square:The “Forever Blooming Bauhinia Sculpture” was placed as a gift from the Central Government and a memory of Hong Kong's reunification with China in 1997.

Central Plaza: standing 374 meters in height, its 78-storey makes it the tallest poured-concrete structure in the world. The four coloured lights atop the building function as a clock.

North Point: 'Little Shanghai', five- or six-storey buildings preferred by the Shanghainese. There are ferry services to Kwun Tong, Kowloon City and Hunghom.

Shau Kei Wan: takes its name from the scoop-like shape of Aldrich Bay.

Sam Ka Tsuen Typhoon Shelter: is situated at in Lei Yue Mun. A path along the coast provides a good place for leisure walks.

Cha Kwo Ling: is a hill in eastern New Kowloon of Hong Kong, and the area around it. The most well known landmark is the two-huge-rock in front of the Tin Hau Temple. As the rocks look like men's testicles, they are named 「Fung Shui Rocks」 or 「Child-Giving Rocks」. The legendary rocks are believed to bless those who pray to them for sons. Even though this tradition is fading out, 「Child-Giving Rocks」 is still an important attraction in Cha Kwo Ling.

Ka Tak Cruise Terminal : Located at the former Kai Tak Airport Runway, this sparkling facility is one of the world's foremost cruise terminals. Designed by Foster + Partners, the three-storey building has been described by Departures as 「the Rolls-Royce of Cruise Terminals」. The terminal will be able to accommodate two mega cruise ships with a gross tonnage of up to 220,000 tons when fully commissioned.

International Commerce Centre: is a 118-storey, 484 m (1,588 ft) skyscraper completed in 2010 in West Kowloon, Hong Kong. It is currently the world's fifth tallest building by height, as well as the tallest building in Hong Kong

Avenue of Stars: is located at the Tsim Sha Tsui Promenade. It honours celebrities of the Hong Kong film industry and a 4.5-metre-tall replica of the statuette given to winners at the Hong Kong Film Awards greets visitors at the entrance. Set into the promenade are plaques honouring the celebrities. Some plaques contain hand prints and autographs of the stars set in cement, but most of the plaques only contain celebrities' names as they are now deceased.

Hong Kong Space Museum: its oval dome structure is one of the most advanced planetariums in the world. It enlightens visitors on astronomy and space technology.

The Clock Tower: built in 1915, the only monument of the original Kowloon-Canton Railway Terminus.